We begin our 1998 Coffee of the Month series with the perenial favorite, Tanzania Peaberry. There are two good reasons for this: First, it will provide a fine comparison with our delicious December COM, Congo Kivu. Produced at the same altitude and latitude and under similar climatic and cultural conditions, the two provide us with a practical test of any “peaberry effect”.

Second, we were fortunate to have been offered a small supply of the Tanzanian, which like Kenyan is increasingly scarce on the world market these days. (According to USDA figures, there are currently zero certified stocks of Tanzanian coffee in US warehouses.) 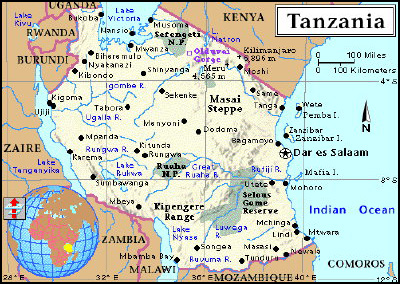 Tanzania is of course a tiny producer of coffee by any standard, ranking only 28th among coffees imported to the US in 1997. Its coffee grows principally around Mount Kilamanjaro, Africa’s highest peak (19,340’), near the border with Kenya. While production is small, the conditions for growing fine Arabica coffees are near ideal:

Tropical climate, mineral-rich volcanic soils, average altitude of more than 4,000’, and 40 to 60 inches of rainfall per year, with adequate distribution throughout the growing season. The landscape is open wooded savanna, upon which several species of coffee grow wild (although the cultivated species are introduced). The high growing altitude is crucial, as the coolness and thinner atmosphere retard the plant’s maturation, giving the time needed to develop complex taste character.

A peaberry is produced naturally when one of the two seeds inside the coffee “cherry” aborts. [See the illustration of a typical coffee cherry at the left.] When this occurs, instead of a flat side where it pressed against its twin, the peaberry grows smaller and “rounds up” to fill the whole fruit. For unexplained reasons, peaberries occur most often at the tip of a branch. The nutrients destined for both seeds are thought to be concentrated in the survivor. We are not botanists, but we like what we taste in Tanzania Peaberry. With over 2000 beans to the pound, we also respect the honest distinction the Tanzanians have earned in painstakingly producing this unique subspecialty

As the quote from Ukers suggests, Tanzanian coffee benefits from a long tradition of quality production.The rich wild character of premium Tanzanian coffee is amply evident in this month’s example. Produced by the “washed” method, Tanzanian coffee is superbly prepared, clean tasting, brightly acidic, fruity, with lingering wine-like overtones in the cup. We take it a shade darker than our typical roasting, to compliment the fresh aromas which gives this coffee its fruity bouquet. The American coffee authors Charles and Violet Schafer call Tanzania peaberry, “the most aromatic coffee we have ever had”.

We invite you to join us once again in savoring the undiminished quality tradition of Tanzanian Peaberry.